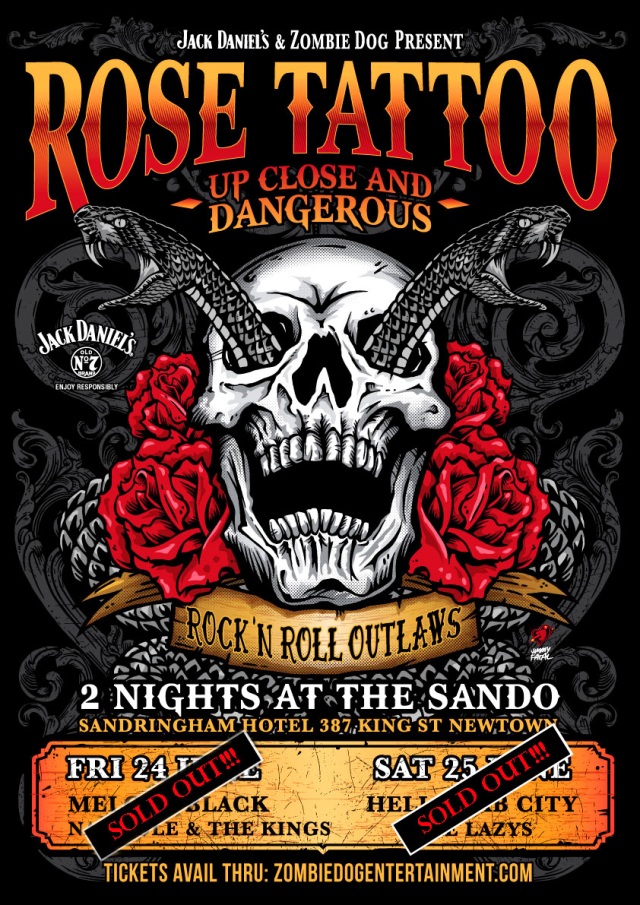 Big thanks to everybody that came down over the weekend to see ROSE TATTOO. Thanks to the Tatts boys for two brilliant shows, and to the support bands (Nat Col & the Kings, Melody Black, The Lazy’s & Hell Crab City) for warming up the crowd for two brilliant nights of Rock and Roll. Thanks to Scotty & the boys from Skin Deep Tattoo & King St Tattoo in Newtown too for popping in and inking punters right in the pub over both nights!

Also massive thanks go out to Jack Daniels for their help and support for the gig, and also the Zombie Dog Entertainment, who we all have to thank for putting this gig together for us.

Here at the Sando, we all hope everyone is recovering well, and that those that got inked a healing nicely! Two Sold out shows, thousands of drinks and two days later, we’re still buzzing from the weekend. It was a great couple of nights and we have you guys to thank for supporting it.

Dont forget to tag us in your photos from the weekend on facebook so we can show everyone how great the nights were. Also if you guys have any videos/images/memories you want immortalised from the night, just email them to sarah@sando.com.au as we will be putting together a little page/blog for the weekend.